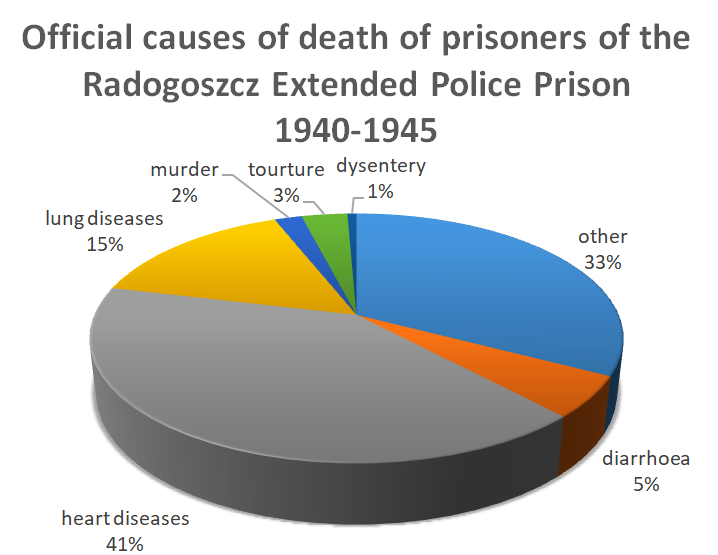 The preserved documentation from the time of the prison’s operation confirms the death of 602 people. The most common causes of death given in the documents include heart and lungs diseases and diarrhoea. Death as a result of torture or gunshot wounds is only mentioned in a few cases. The figures and data provided in official German documents cannot be treated as reliable. Many deaths were not documented, and the bodies of the victims were not always returned to their families. A vast majority of prisoners died in the Radogoszcz prison as a result of abuse, severe beating, and torture inflicted by the guards, and of disastrous sanitary and dietary conditions. Most probably, we will never learn the true statistics on this.

The Chronology of the Radogoszcz Prison

People arrested as part of an operation against the Łódź intelligentsia are placed in the former Michał Glazer’s factory in Radogoszcz (today’s 17 Liściasta Street). Many of the detained, after provisional trials, are sentenced to death and murdered in mass executions in the forests near Łódź.

A resettlement camp for the displaced from, for example, the Montwiłł-Mirecki Estate in Łódź, is established in the former Samuel Abbe’s factory (today’s 147 Zgierska Street).

Prisoners are transferred from the former Michał Glazer’s factory to Samuel Abbe’s factor. The Radogoszcz prison (Polizeigefängnis Radogosch) is created. Its warden in SS-Obersturmführer Robert Ehlers. At the time, the staff mostly consists of SS members.

A large-scale operation against the Polish intelligentsia and youth is carried out in Łódź and the region. At the time, most of the arrested from Radogoszcz are deported to the Dachau camp.

The Radogoszcz prison comes under the Police Praesidium in Łódź. Police lieutenant Walter Pelzhausen becomes the new warden. From now on, the prison staff includes local Volksdeutsche, and the prison becomes transitional.

The Radogoszcz prison is altered: the fence is made higher and barbed-wire entanglements are added; four guard towers are built; the building “under the glass roof” is converted into a prison building, which involves dismantling the remaining textile machines.

Alfreda Rytel née Siewierska gets sworn as a member of the Union of Armed Struggle by the Commander of the Łódź-North Quarter of the Union of Armed Struggle/Home Army Wacław Górecki, pseudonym Wacek. From her home adjacent to the walls of the Radogoszcz prison, she and her sister conduct observations, and then share them with the underground organisation. She also delivers kites thrown over the prison wall by prisoners to their families.

Execution of 100 Poles in Zgierz – the largest public execution in the Wartheland. The executed include Radogoszcz prisoners. Walter Pelzhausen attends the event.

As a punishment for stealing two loaves of bread, warden Walter Pelzhausen executes nine prisoners, even though only two of them were proven guilty. This is the largest execution in the Radogoszcz prison before its liquidation in January 1945.

List of people murdered in the execution on April 1, 1942 r.

Members of the Polish Socialist Party, arrested on November 11, 1941, are brought to Radogoszcz.

A football player of RTS Widzew Longin Mielczarek is murdered in prison.

As a result of a massive operation against the Łęczyca Division of the Home Army, many of its members are brought to the Radogoszcz prison, including a lawyer and author of Radogoszcz memoirs Władysław Zarachowicz.

The building “under the glass roof” is altered: the shower room and the hospital part, moved from the four-storey building, get reorganised.

The prison faces a six-week epidemic of typhus fever. The facility is put into a quarantine: there are no incoming transports and the entire staff have to stay in prison.

Eugeniusz Lisiak, pseudonym Topór, one of the founders and member of the youth underground organisation “Promieniści”, dies in Radogoszcz .

The Radogoszcz staff liquidate the facility. Approximately 1,000 prisoners die in mass shootings and as a result of setting the building on fire. Only thirty-one people survive the massacre.